Thirty-one years later, the power of Spike Lee’s ‘Do the Right Thing’ endures

The #UltimateSummerMovie Showdown is underway, and voters chose “Do the Right Thing” (1989) as the winner of Week 9, dedicated to films first released in theaters from June 26 to July 2 (between 1975 and 2019). Justin Times film critic Justin Chang sat down with entertainment columnist Glenn Whipp to discuss the greatness of Spike Lee’s film and how he always spoke to a nation in turmoil.

JUSTIN CHANG: As of May 31, Spike Lee released a short video interspersing the final moments of three black men who died violent and suffocated while in police custody. Two of them, Eric Garner and George Floyd, became powerful symbols of outrage and helped to spur #BlackLivesMatter protests across the country. The third, Radio Raheem, is a fictional character played by the late Bill Nunn in “Do the right thing”. The juxtaposition of fiction and reality does not seem shocking or, worse, self-aggrandizing; it’s shockingly transparent. Recalling Lee’s masterpiece in 1989 in its entirety the other night, including his galvanizing ending, I remembered again how vivid and real everything is, with what strength and yet precisely captures the chaotic choreography of furious protests and police brutality .

Those moments – specifically, the scene in which Raheem’s enraged and enraged friends and neighbors destroy Sal’s famous pizzeria – attracted harsh criticism from white film critics 31 years ago. For years, Lee rejected these jabs as racist, and the story justified him and the film in several ways. It is racist to suggest that the black audience would watch the film and be immediately encouraged by acts of violence and unrest – as if “Do the right thing”, however powerful and true, could sustain a mirror for society more disturbing than society. society itself. It is also saying, of course, that within the context of history, so few critics disagreed with the destruction of a black man’s life and focused on the destruction of a white man’s property. Sound familiar?

In a way, all of these criticisms were the definitive compliment to “Do the right thing”, a collective acknowledgment of how close to the bone, how disturbingly recognizable Lee’s Brooklyn was. Saying it is so recognizable today, in the Garner and Floyd era and in so many other black lives taken too early, it is to point out the obvious: it is difficult to think of a moment in the last 31 years when “Do the right thing” was not timely. Opportunity, of course, is hardly your only virtue; its relevance is inseparable from the grandeur of its cinema and the complicated humanity of its narrative. And while it may be the most cunning and insightful film we’ve ever had the honor of celebrating at the Ultimate Summer Movie Showdown, it may also be the one that best suits reality: so palpably Lee conjures up heat and sweat from the hottest day of the year, I I had to watch the movie with the air conditioning and a fan in full swing.

GLENN WHIPP: The last time I spoke to Lee, he mentioned the criticisms you mentioned, Justin, quoting critics by name. He doesn’t forget – nor should he. Newsweek critic Jack Kroll was concerned with how the “urban audience” would react to the end of the film, saying the film was “dynamite everywhere”. Likewise, New York magazine’s David Denby criticized the ending, writing “if some audiences go crazy, [Lee] is partially responsible. “It’s not hard to guess who he meant by” some audiences. “Joe Klein, writing in the same publication, regretted the “dangerous stupidity” of the film’s message, hoping that “Do what’s right” would open “in a few cinemas near you”.

It is interesting how “some people” can see a film – or a protest or any kind of discussion about racial inequality in America – and completely lose what is being said. After watching “Do the right thing” again the other night, I moved on to the bonus features of the record (screams to the physical media, long live) and watched the press conference that followed the film. Premiere at the 1989 Cannes Film Festival. Three journalists brought Malcolm X’s quote about violence and racial justice that Lee included in the epilogue, two of them not mentioning (or unaware … but how could that be?) That Lee also included a contrasting quote by Martin Luther King Jr. The lonely journalist who acknowledged that there were indeed two quotes thought that Lee should have kept King’s words to the end, because they are “more beautiful”.

People see what they want to see, I think, even – especially – with “Do the right thing”, a film that Lee made with the utmost care and intention and on his terms. And now, every day, in the news, we watch fear and prejudice continue to obscure our ability to witness what must be unmistakably clear. “Do the right thing” made some people uncomfortable, because they were telling truths from a dark perspective that they didn’t want to accept. You have observed, Justin, many reasons to despair at the continued relevance of the film, to which I would add one more: the lack of lasting will that we, as a nation, have to sit with this discomfort, listen to and learn from. 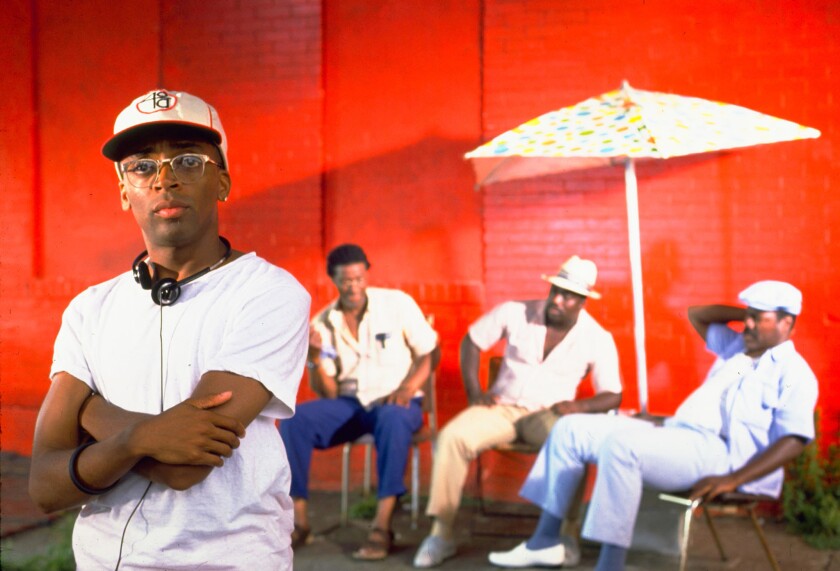 Spike Lee on the set of “Do the right thing”.

CHANGE: That reluctance you mention, Glenn, is a pretty damning charge of white (and adjacent white) fragility in this country. And yet: at the risk of appearing naive optimistic, there are certainly reasons for hope and despair. I am not alone in observing that something seems different about the intensity and duration of the current protests, that after years and years of struggle and mourning, something in the political body seems to have finally come loose. And to bring him back to “Do the Right Thing”: Although the film was hardly loved in its day – it was a commercial success, received great reviews and received two Oscar nominations from an academy whose idea of ​​telling the racial truth that year it was “Driving Miss Daisy” – its canonization much more widespread now is, in itself, a sign of hope.

Part of this, of course, is due to Lee’s growing acceptance of the industry, no longer a terribly talented young talent, but an established, authoritative and extremely important filmmaker. He may have left Cannes empty-handed in 1989, but he is now one of the festival’s darlings (and should have been the first black president of the Cannes jury before the COVID-19 pandemic). He won many awards, including a screenplay Oscar, for “BlacKkKlansman”, which established a clear connection between his surprising 1970s history and the resurgence of white nationalism under President Trump. The ideas that Lee deals with in this film and in “Do the right thing” – and with which he has spent his entire career – can still make “some people” uncomfortable. But it is also clear that more than a few Americans, including many white Americans, now find them indisputable.

At the end of “Do the right thing”, we see King and Malcolm X in a photograph, which Smiley (Roger Guenveur Smith) posts on the wall of that burned-out pizzeria. Remember that this whole film was a conversation, a dialectic, an image that structures its powerful argument around a series of arguments. These arguments can take many different forms, some as casual as the daily comings and goings between Da Mayor and Mother Sister (played by the great Ossie Davis and Ruby Dee), and some as hilarious as ML (Paul Benjamin), Sid de coco (Frankie Faison) and Sweet Dick Willie (Robin Harris).

You can hear this most vividly in the brief exchanges between Mookie (Lee himself) and his employer, Sal (Danny Aiello). Sal does not see himself as racist – he is certainly not as open in his fanaticism as his son Pino (John Turturro) – and, like almost everyone, he tries, at his best, to do the right thing. Not enough. And yet, the depth of Lee’s compassion for him and all his characters is unmistakable. “Do the right thing” can climax in death and destruction, but it lasts, in large part, because of the strength with which Lee floods the screen with life. 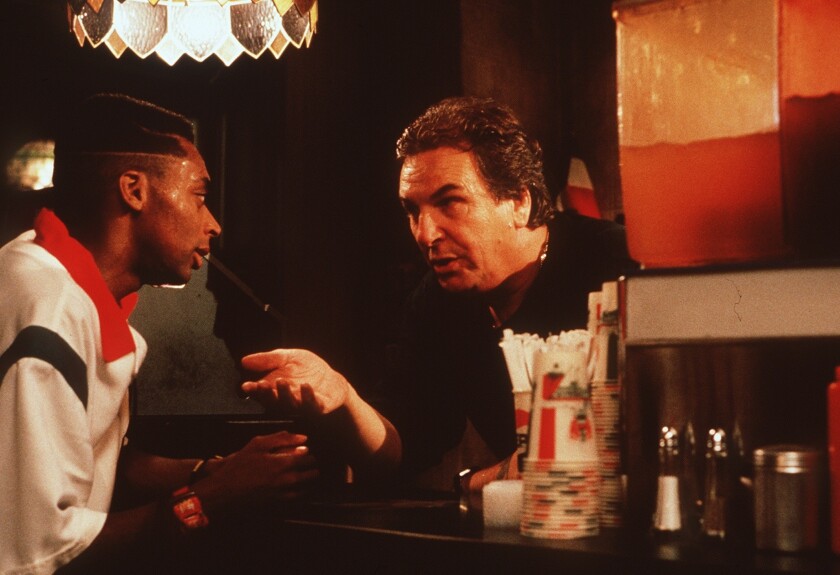 Spike Lee and Danny Aiello in the film “Do the right thing”.

WHIPP: The vibrant life in it Bed-Stuy Block in Brooklyn it’s one of, oh, about 100 reasons why I can watch “Do the right thing” annually and never get tired of it. I feel that Lee’s team rarely gets the credit they deserve, so please satisfy me while I greet the cinematographer Ernest Dickerson for all the photos of fluid cranes and character-revealing camera angles and the way he uses colors, production designer Wynn Thomas for the construction of Famous Pizzeria de Sal and the Korean supermarket across the street, the rigid editing and Barry Alexander Brown’s driving force, Bill Lee’s beautiful score and costume designer Ruth E. Carter by the sea in graphic t-shirts, shorts and biker shirts and medallions, evoking what a hot summer day is like in Brooklyn. All love, without hate.

These elements – along with an exceptional cast that includes Rosie Perez and Martin Lawrence in their film premieres – invite you to the conversation that takes place in the streets and the streets of the neighborhood, in the flesh, in the resentments and in the love. There is, as you say Justin, compassion and understanding for everyone we know in the film, with the exception of New York’s Finest, which we see encountering systemic hatred and strangled murder, and which [expletive], entitled cyclist who rocks the primitive Jordans of Buggin ‘Out and serves as a precursor to aggressive and thoughtless gentrification. (Quick shout for the great Giancarlo …